Yesterday, I read about the Virtual DOM in Elm. As a backend developer by default, I am curious about this topic and want to learn more about why there is something called Virtual DOM.

The Document Object Model (DOM) is the data representation of the objects that comprise the structure and content of a document on the web.

How are DOM updates rendered on the screen?

The problems of DOM updates

Updating the DOM by manipulating it has the two problems:

Virtual DOM is an in-memory representation of Real DOM. It is a lightweight JavaScript object which is a copy of the Real DOM. The next part will describe the Virtual DOM in Elm. You have to be familiar with the basic concepts (Model, Update, View) of The Elm Architechture

In Elm, the view function with the initialModel produce a virtual DOM representation of HTML we want to display. Elm interprets the virtual DOM and renders the correct HTML in the browser. 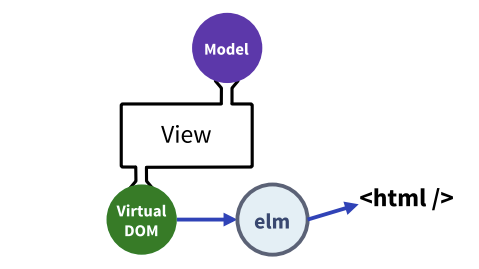 Imagine that we have a button with the event function onClick which mapped to a ButtonClick message in the update function.

Elm reads through the returned virtual DOM and encounters the event attribute, using the DOM API to wire up a click handler from the button’s DOM node. When we click the button, the click handler will dispatch the ButtonClick message to queue in Elm runtime. 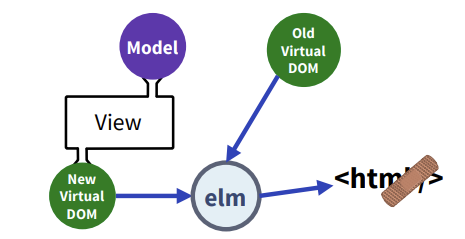